Yes, snow in the Arizona desert. And no, not in the high desert country – where it is the norm to have snow, and lots of it. Flagstaff and the White Mountains get enough snow to be home to ski resorts. Both places being only hours away from the Phoenix valley so you could conceivably ski in the morning and make it back to the valley for a round of golf, or at least a few holes.

But this most recent snow event happened down in the Phoenix valley – the low-lying desert with average elevation around 1000 feet. I have been coming to the Phoenix area for more than 40 years and have never experienced anything like this. Snowflakes here and there, but not actual accumulation of snow on the ground.

For us, this is a once in a lifetime weather experience here in the desert so I felt it was worthy of a blog post, if for no other reason than to share some pictures not often captured in Arizona. I have often wanted to experience the desert with a little snow cover – but assumed I’d have to time a trek to Sedona or the like to get those photo ops. Never thinking I’d ever have the opportunity to capture these kinds of photos in my own backyard.

I live in the east part of the Valley where Four Peaks, Red Mountain, the Superstition and McDowell Mountains rise up out of the desert. Inhabitants here revel at awaking to the view of Four Peaks blanketed with snow on occasion. But generally these snow storms hang in these outward lying mountain ranges and just supply us with this ‘off in the distance’ majestic visual while we stay snow free, basking in the valley’s sun.

Being from the midwest, where the four seasons abound with diversity, I have truly missed experiencing a little snow here and there. So I was giddy with this anomaly snow event. With temps hovering around the freezing mark the snow quickly turned into sheets of ice by morning, leaving everything glazed over with a whitish hue.

Our home sits high on a hill, elevation of 1945 feet on top – with a steep curvy driveway and an elevation change of 300 feet from top to bottom. During the build we joked how it’s going to be a real challenge to shovel in the winter and worry about sliding down the icy driveway. Never in our wildest dreams did we think this could be a possibility. Luckily by the time we woke up during this recent weather event – the roads were wet, but not icy. I’m sure if we’d had to make a middle of the night run, it might have been a different case.

On February 22nd, 4 inches of snow fell in Fountain Hills, 9 inches in the McDowell Mountains, and 12 inches in the Tonto Hills and Carefree areas.** The last measurable snow event, of an inch or more, recorded in the Phoenix valley, was in 1937. There were traces of snow in 1998 and 1990.*

Waking up on February 23rd to snow in our Arizona backyard. 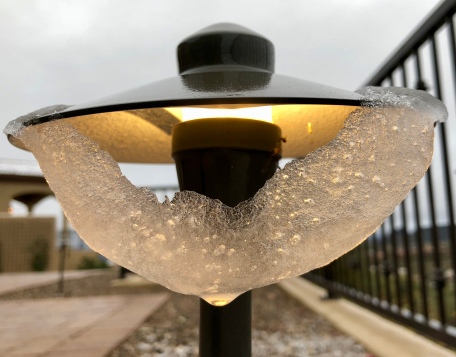 Even this ‘Elk’ was wondering ‘what the heck’ – he moved south to get out of the snow! 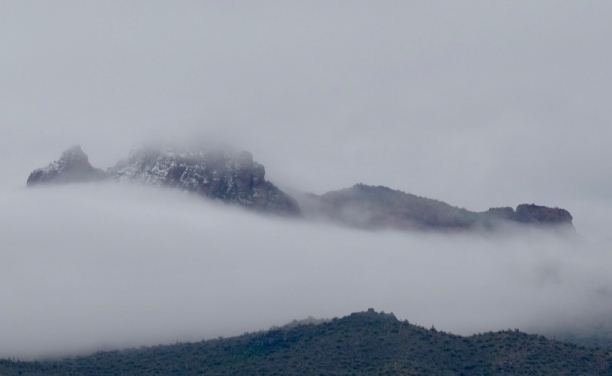 Red Mountain, although shrouded in clouds much of the day showed a hint of snow – first time ever. 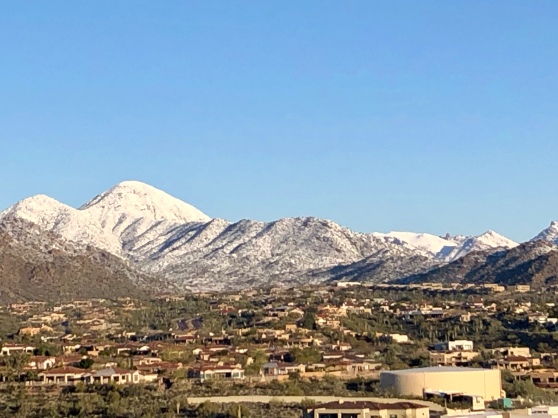 The McDowell Mountains that separate the east valley from Scottsdale, and where we spend a lot of winter months hiking – just 10-15 minutes from our home.

Although the actual peaks of Four Peaks are slightly shrouded in clouds, the density of the whiteness of snow shows how deep it had to be – upwards on 3 feet for this mountain range about a 20-minute drive from Fountain Hills.

Palm trees and a golf course in the same picture of the snow-capped Four Peaks mountain range was a sight to see.

But don’t let this snow event deter you from heading to the desert in the winter to warm up and get a reprieve from the real winter wonderlands in the country, especially in a year that has experienced the extremes of snow and cold temps. By the end of the next week we were back up into the 70’s, still a little snow showing on Four Peaks, and a full 10-days later all traces of snow were left only in our memory banks.

Within days a good amount of the snow had melted off of Four Peaks. 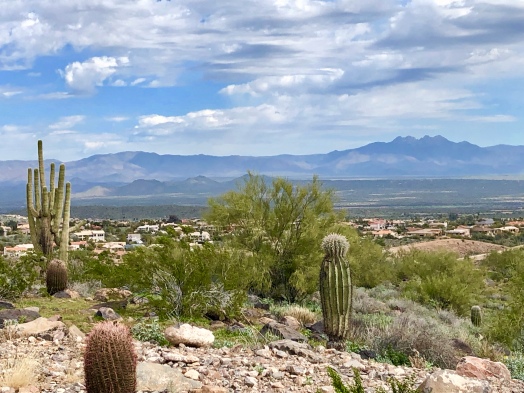 And now 10 days later, not a trace of snow to be seen – even on Four Peaks. Ahhh…winter in Arizona.