Picking up where I left off, leads me to share our dining and drinking experiences from NYC and Martha’s Vineyard. ‘Our’ being whoever I can bring into the ‘foodie’ fold. It’s not hard to find takers.

As I curl up in my big comfy chair, laptop where else but in my lap, sipping a Manhattan created loosely from the Manhattan on Felidia’s of NYC cocktail menu – I resurrect the tastes of the delectable cuisines that have passed my palate in recent months. Okay, enough fluff talk – time to get down to the details:

I lost count a long time ago, as to how many NYC restaurant reviews I have posted – but the one thing I have not lost count of is how many negative NYC restaurant reviews I have written – 0! And that is not because I have chosen not to write those reviews, it is because I have not experienced any sub-par dining experiences in NYC. That is remarkable seeing how many restaurants exist in this magnificent city – but it is that competition that keeps all of these restaurants on their shoe tips, trying to out-create each other, but yet knowing when to reign it in so their dishes remain edible enough to entice customers to return.

Tavern on 51, New York Palace – looking for a great place to end the busy day or grab a night cap? This is the place. In the New York Palace hotel, the ambience is inviting, the seating plush and comfy, the drink menu expansive, and the drinks mind-altering if you imbibe too much in these tasty beverages.

Billy’s Bakery –  across the street from the newly opened Whitney Museum on the west side of lower Manhattan, this ‘bakery’ is a great place to grab a tasty and generous breakfast and a great cup of coffee while watching the lines grown while waiting for the museum to open.

Billy’s Bakery serves up a great cup of coffee, as you sit and watch the action at the Whitney Museum across the street.

Via Carota – when you think of a fun dining experience in NYC, this is kind of place you think of. Interesting dishes served by waitstaff who ask you what kind of foods you like and creates a dining experience based on those tastes. Even with the place overflowing with people, they are willing to make any drink or any dish to fit your palate. A must return!

Roasted quail with garlic and rosemary served on a bed of mushroom and bean risotto.

Ray’s Pizza – truth be told Famiglia’s has our favorite late night pizza, but in a pinch if one of these pizzeria’s can not be found, Ray’s can feed that 2 am hunger. The flavors and quality of toppings are good, the crust can be a bit dry and crunchy – hard to fold and eat proper NYC style.

Never short on ingredients – Ray’s is a great late night pizza spot after a night of hitting the streets of NYC.

Extra Fancy – what a fun unique display of menu choices, in a neat boutique style setting, in Brooklyn. There is a large cool bar inside and an outdoor courtyard in the back dotted with trees. And the food trumps the setting – must tries are the oysters, deviled eggs and fried brussel sprouts.

Deviled eggs topped with trout roe is a tasty way to start off an evening of tasty seafood dishes at Extra Fancy in Brooklyn.

A place that has held a place high on my bucket list, Martha’s Vineyard, met my main expectations of being a place rest and relaxation, but the restaurants did not disappoint. My next post will be about the activities available in all the quaint little towns dotting this amazing island, but for now I will focus on how we were able to keep our belly’s full and our thirst sated.

Atlantic Fish and Chophouse – a recommendation from our concierge at the Charlotte Inn for great drinks and great food. Such a good recommendation we made return visits. Sits on the waterfront, with great seafood choices and refreshing and flavorful drink choices. A happening bar come the evening hours.

An interesting and unique cocktail menu at Atlanta Fish and Chop House on Martha’s Vineyard in Edgartown. Manhattan served with a bacon garnish.

The Seafood Shanty – sit upstairs, on the deck if you can. We sat at the bar and had a blast watching the bartenders going 100 mph serving up drinks, beers, wine and food – professional waitstaff and who have fun at their jobs. The seafood is fresh and they have their own twist on certain faves like the lobster rolls.

Two things draw people to a restaurant – ambience and food. Come watch the bartenders do their thing, sit outside on the deck overlooking the bay, while taking down one of their amazing lobster rolls.

The Terrace at the Charlotte Inn – a quiet indoor garden-like setting, the knowledgeable but patient professional waitstaff, serve up a dining experience that I’m guessing is not replicated any where on the island. And the chef serves up a menu that has us putting The Terrace on our must revisit list.

Fine dining at The Terrace at The Charlotte Inn in Edgartown on Martha’s Vineyard. These lamp chops were so tasty they didn’t need the mint sauce.

Larsen’s Fish Market – now obviously when you are this close to the sea where lobsters abound – all you have to take notice of is there is not a restaurant, 1-star to 5-star, that does not include a lobster dish on it’s menu. But Larsen’s is where you go to stand in a long line to get a whole fresh lobster to eat at one of the few thrown together picnic tables or barrel and upturned crab traps. Doesn’t get much better than that!

A full lobster served up fresh at Larsen’s Fish Market in Chilmark on Martha’s Vineyard.

Lambert’s Cove dining – another fine dining option in one of the many quaint little towns that dot Martha’s Vineyard. Lambert’s Cove is an Inn, that sits at the end of a very long and winding narrow road to a beautiful little working farm setting that many of the menu ingredients come from.

Waterside Market – while waiting for our ferry to arrive to take us back to the mainland we searched out a breakfast spot in one of the little quaint towns we had yet to visit on Martha’s Vineyard – Vineyard Haven. We walked the streets, and came upon a market, that sold high quality, beaucoup flavorful dishes that you ordered at the counter. A fun little find!

With so many of these restaurants being so busy, all the time it’s often hard to get a reservation short-notice – which can be tough when you don’t know your schedule. We have taken to sitting at the bar, that is first come first serve, and are learning to enjoy this dining experience even more – as you really get to watch the place in action – dining and a show all rolled into one fulfilling evening out.

My very first visit to New York City was with my father for my 18th birthday, during the holiday season. We stayed in the hallowed Waldorf Astoria Hotel and went to three plays in three nights. What a magical weekend – I was hooked on NYC!

In the last 10 years I have been to New York City no fewer than 20 times. I have stayed at a different hotel every time, and have only returned to one or two restaurants multiple times. Not because the experiences were bad and I am on a search to find a place worthy of a return visit, but because the choices are so many, it is hard to limit the experiences in this vast and eclectic city.

I will list as many hotels and restaurants as I can remember, and attach a mini-review as well as pertinent info such as price and location. The post will be done in two parts, as there is so much to share.

Every time I come to NYC I learn more and more why this place draws people in like it does – whether you are there for daytime sightseeing or the acclaimed nightlife. The hotels are as diverse as the clientele that frequent them. Where do these people come from? How did they choose to stay in a specific hotel? Every time I come to NYC I am amazed at how many different hotels I come across that I never knew existed – from the small side street boutique hotel to the massive main avenue hotel – yet they all seem full. There is a hotel to fit the right nitch for every unique demographic.

It is hard to decide what criteria dictates a status star, because every person’s needs are different. So all I can do is share what stood out to me and let my readers decide what hits home with them. The star ratings are taken from the rating system from booking.com.

The Benjamin: 5-star; $349; decent sized rooms and bathrooms in classic traditional mono-toned color themes; Midtown-East; older clientele; service and room conditions lacking for a 5-star hotel but is somewhat made up for in competitively priced rooms.

Westin-Times Square: 4-star; $380; nice size and nicely appointed modern rooms; Times Square; ask for a higher floor to get away from noise of Times Square and get amazing views; Shula’s Steakhouse; large, but noisy lounge area; service typical of a chain hotel – solid but nothing special. 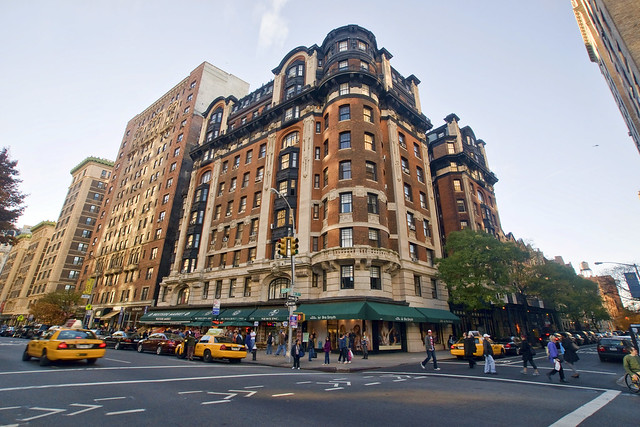 Bryant Park Hotel: 4-star; $495; smaller, funky, modern rooms; (lower) Midtown; younger clientele; great location across from Bryant Park and the New York Library; you don’t come here for the service or the comfy rooms – but for the local and the chance to see celebs. Overpriced.

The Wythe Hotel: 4-star; $490; big open industrial rooms, each with a unique theme reminiscent of the area; Williamsburg, Brooklyn; younger clientele; no lounge area, but nice bar/restaurant on main floor; great rooftop bar that usually has a long waiting line to get in to – unless you are staying there. Pricey, but something fun and different.

Affinia Dumont: 4-star; $399; decent size rooms in a modern/classic comfy motif using lots of reds; Midtown (east); mixed clientele; nothing special, but good price for size of rooms and it is right down the street from the Empire State Building.