Yosemite National Park, Yosemite, California. Virtually unchanged in the last 30 years. If there is one thing I have to give our government credit for, it is making strident efforts to leave natural beauty of our National Parks basically untouched. That may be because there is not enough funding to make many changes, but if keeping the effects of mankind to a minimum helps in keeping places like Yosemite replete in its natural state, than so be it.

Twenty-seven years ago, my husband and I set up home in Stockton, California, where his first job took us after being newly married. Stockton itself, is not a destination location, but as mentioned in a previous post, it is a great central location to many other parts of must see destinations in Northern California, such as Yosemite National Park.

We were 22-years-old and had a gutless wonder of a car. We were young and naive and inexperienced as to what lay ahead of us in visiting Half Dome and El Capitan, the two main rock formations in Yosemite that draw in rock climbers from all of the world. We are more of the floating down the river types, peering up at those more adventurous types scaling the rock faces that line the river valley in Yosemite.

In my thirty years of road travel, throughout the US, Canada, Mexico, Europe and the Middle East, I have come across some pretty scary roadways. The winding roads between Puerto Vallarta and Manzanillo had me nauseous for almost four hours straight. The drive up around Jerome, Arizona, with its narrow two-lane roads and severe drop-offs left me feeling light-headed from my fear of heights. The switchbacks through the high country in Italy left me in a constant state of trying to catch my breath. The desolate roads along the spine of the Abarim Mountain Range in Jordan had me on the lookout for rock slides.

The rugged terrain along the roadway from the Dead Sea to Petra, Jordan  – watch for rock slides

But no where, in all those years of road travel, have I felt as fearful as I did during the drive into Yosemite. The steepness was so severe that I was seriously concerned our gutless wonder of a car was going to sputter out and we would roll back down the road taking out every vehicle behind us like a plinko chip. Luckily that did not happen, and the heart pounding trek into the park was worth every beat exploding in my ears.

I had assumed that in the last 25 plus years, that nasty steep curvy road would have been updated to a more traveler friendly roadway. But when I received a communication from friends who just recently took their rock-star sized bus into the park, I realized that had probably not happened – the text read, “Beautiful, but those roads are not for the faint of heart….” When my 23-year-old daughter told me last week that she and a girlfriend were going to visit a friend who worked at Yosemite, the only advice I could give them was to get a powerful car that’s good on the curves. For once my daughter listened: 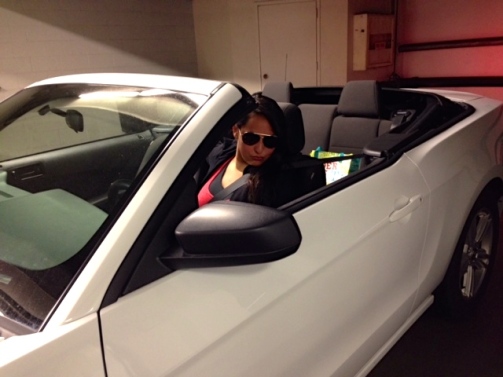 My daughter’s friend behind the wheel of a Mustang to drive to Yosemite – powerful & good on the curves (the car that is!)

Once in the park the sights and views are breathtaking – in a very healthy way. During our trip to Yosemite my husband and I took the more leisurely route to sightseeing – we rented inner-tubes, one for each of us and one for our cooler of “refreshments” and took a lazy float down the calm part of the Merced River that bisects the towering rock faces of Yosemite. Lining the riverbanks are the Giant Sequoia Cypress trees, aka California Redwoods. 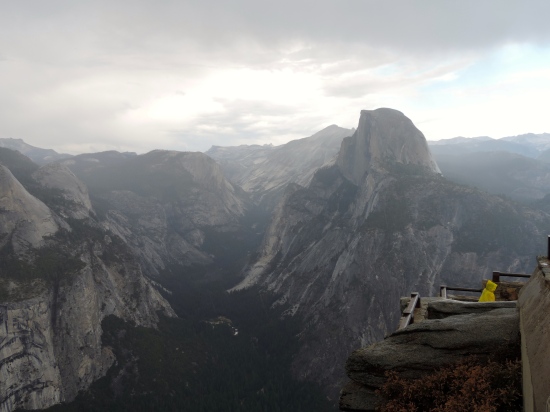 Half Dome overlooks the river valley where we my husband and I floated down the Merced River. 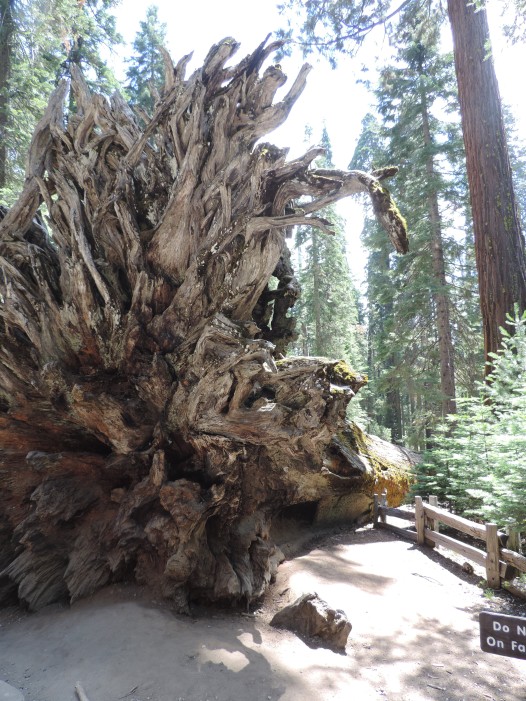 The exposed root system of a Gian Sequoia