The castles in the Czech Republic may not have the notoriety of castles in the UK or Germany or France, but they are a must add to your travel itinerary.

Thee most well-known is the Prague Castle. Ironically the actual castle is a long, low somewhat staid building. The St. Vitus Cathedral that sits within the castle grounds is what gives the castle its iconic skyline – especially when it is lit up at night.

Prague Castle lit up at night

Construction on Prague Castle began around 880. This UNESCO Heritage site is listed in the Guinness Book of Records as being the largest ancient castle complex in the world – 70,000 square meters.

St. Vitus Cathedral is the largest gothic church in the Czech Republic. With detail and ornate accents to rival some of the greatest cathedrals in Europe. Within the castle are some unique chapels that have been created by royal figures throughout the years.

St. Vitus Cathedral, sits within the property of the Prague Castle 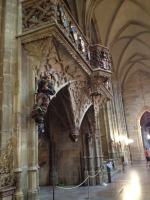 One of my favorite spots in all my travels is the castle that sits in the idyllic setting of Pruhonicky Park, an hour subway and train ride outside of Prague. The castle itself dates back to the 1270’s, but the grounds were turned into a fairy tale land that stimulates the senses, back in the 1800’s. I could not stop taking pictures so I will let my pictures replace my words for the rest of this post.

My son, Mike, taking in the smells of the fragrant vibrant colored flowers that line the pathways

Is it a picture or a painting? An idyllic setting for a romantic picnic along this stream running through Pruhonicky Park 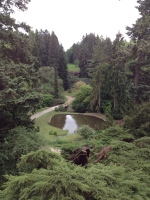 More castles: Prague being a fairly small country, allows you to take short day trips to see many of the countries highlights including a couple of more castles. 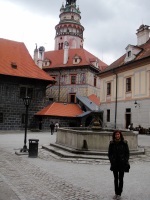 State Cesky Krumlov Castle, built in the 1200’s, is located approx. 100 miles south of Prague on the Vltava River, is comprised of some 40 buildings

Must dos and sees: Give yourself plenty of time to enjoy the highlights of Prague and the Czech Republic. Try at least one of their home brews to accompany a plate of ghoulish and knedly. Bring a good camera to capture the ornate colorful architecture of the city and the castles that abound through the countryside. Most importantly, relax into the laid back attitude that surrounds you.

Chillon Castle: just outside of Geneva, on Lake Geneva, sits this romantic castle that has anything but a romantic history

Continuing on with a royal theme – but from a different era, with very different styles of reign. Chillon Castle (Chateau de Chillon) dates back as far as 1150 with the Savoy family occupying it until 1536. At this point the Swiss, or more specifically the Bernese, occupied the castle until 1798. It was during this era that the castle endured its darkest hours, as it was primarily used as a fortress, arsenal and prison for people accused of witchcraft.

Restoration on the castle began in the late 19th century and continues today. The exterior of the castle elicits the romantic royal style of castles seen in children’s fairy tales or at Disneyland. But inside is a different story. Remnants of the prisoners quarters – an open, stone cavern in the bowels of the castle where prisoners were shackled to posts and left to lay on the stone floor for months, and sometimes years. There is a barely visible drawing of people on one of the prisoner stone walls, showcasing the artistic talent of one of the prisoners, with a piece of charcoal as his paintbrush.

The floors above show the opulence of the royal families that occupied the castle throughout the different eras. The rooms were large, with oversized ornate wood beds and other furnishings. Yet the beds were short, and at my 5’6″ I was having to stoop to get through the doorways, showing the average height of people of those bygone eras. Fireplaces were large enough for the cooks to stand in them while cooking meals in large pots over the fire.

Castles of this era were self-sustaining. Chillon had its own winery and chapel. Large storerooms of food were placed throughout the castle to help families and their servants weather the weather or sieges upon the castle.

Apparently parts of the castle can be rented for special occasions. This would surely be a grand setting for a fairy tale wedding, or children’s birthday party with ample places to hide for a game of hide and go seek.

The castle is about a 20 minute train ride from the heart of Geneva, that takes you along an elevated line above the shoreline of Lake Geneva. It was a crisp fall clear day, and showcased scenery depicting more of the natural beauty of this area of Switzerland.

Other highlights of the Geneva region were Old Town – where my traveling companion and I walked for hours through the cobblestone curving streets, stopping in small quaint independent shops to buy an old leather-bound book or a locally made Christmas ornament or shawl to throw over our shoulders as we sat having a cafe’ au lait after our walk.

The flower clock is a reminder of what this region is really known for – swiss time pieces. Every canal along the hub of the city is flanked by Swiss made retail watch stores: Rolex, Patek Phillipe, Piaget, Swatch, Bucherer, Omega – but don’t be looking for a deal being in the heart of watch-making – watches are sold at a premium here.

The beautiful ornate architecture throughout the city is worth several pictures. There is an eclectic mix of fine dining. And the walks along the shores of Lake Geneva are worth several strolls to take in the breathtaking views of the Alps that peek through the low-lying clouds.

Where we stayed:  The Grand Kempinski Hotel, http://www.kempinski.com/geneva, Quai du Mont-Blanc 19  1201 Geneva, Switzerland  +41 22 908 90 81.  $$$$  For the price the hotel was lacking in the wow factor. But the service was top-notch. The patrons of the hotel ranged from royal Arab princes dressed in traditional garb to Texas oil barons in their cowboy boots being obnoxiously loud. The spa is worth the price of admission. And although the meals and drinks were expensive the amounts were ample.